Published by Stephen Kinzer on August 3, 2008 | Leave a response

“For a sheer, eye-opening revelation of what’s been going on in another part of the world, Stephen Kinzer’s “A Thousand Hills: Rwanda’s Rebirth and the Man Who Dreamed It” packs a lot into its 380 pages. Kinzer, a former New York Times foreign correspondent who has worked in more than 50 countries, tells the story of Rwanda’s new leader, Paul Kagame, who is trying to turn a nation ravaged by ethnic killing into the star of Africa.” 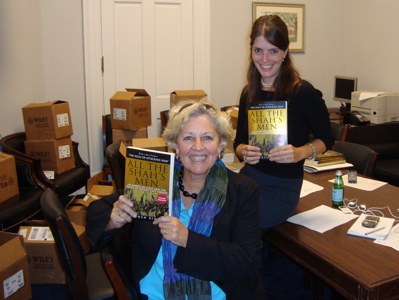 As part of its campaign against US intervention in Iran, Just Foreign Policy has sent every member of Congress a copy of “All the Shah’s Men: An American Coup and the Roots of Middle East Terror.” Two JFP organizers, Sarah Burns and Chelsea Mozen, packed each book with a letter from Rep. James McGovern recommending it. 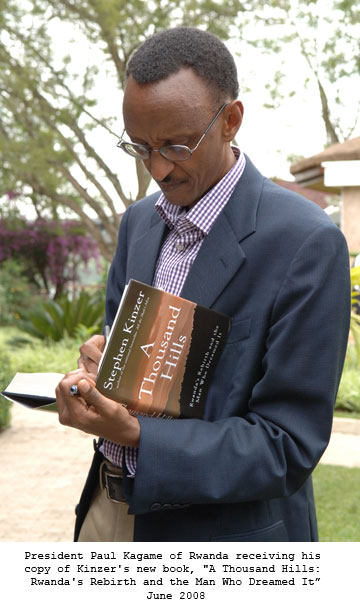 Comments on US relations with Iran and Afghanistan, in speech to US Labor Against the War conference

The Reality of War in Afghanistan

Despite their differences over how to pursue the US war in Iraq, Senators John McCain and Barack Obama both want to send more American troops to Afghanistan. Both are wrong.
Boston Globe, Oct. 15, 2008 (link)

Appearances on C-Span and Chicago Public Radio discussing A Thousand Hills: Rwanda’s Rebirth and the Man Who Dreamed It.

Transcribed, Guernica, March 2007
“I studied these overthrows of foreign governments not as isolated, unrelated incidents, but as part of a long continuum.”

Interview with Amy Goodman on “Overthrow”

Light Millennium · June 2006>
“I’ve actually loved almost all of the countries I covered.”

History News Network · September 2005
“Only by understanding the cause of tragedy can we hope to avoid future tragedies.”

Interview with Buzzflash on “All the Shah’s Men”

BuzzFlash · 2003
We Americans have been asking ourselves now for some time why people in many parts of the Middle East react so negatively toward us and what we consider to be our democratic project for the world. The more we look into history, the more answers we find.

Democracy Now: How to Overthrow a Government

Interview with Amy Goodman on publication of “Overthrow”

Interview with Amy Goodman about Iran

Concord, New Hampshipre · 2008
Speech about possible US intervention in Iran

The Folly of Attacking Iran: Lessons from History

Democracy Now: How to Overthrow a Government

The Gaurdian · August 16, 2008
In his first interview with a foreign newspaper since becoming head of state, Abdullah Gül tells Stephen Kinzer of his vision for his country as a bridge between nations.

Will Turkey Make It?

After So Many Deaths, Too Many Births

New York Times · February 11, 2007
Rwanda, still haunted by genocide, faces up to the threat of overpopulation.

New York Review of Books · Vol 55, # 10 · Jun 12, 2008
During the 1970s, Dionisio Marenco was one of many young Nicaraguans who decided to risk their lives by joining the rebel Sandinista National Liberation Front. He helped rob a payroll office to finance the group, joined in planning spectacular commando raids, and narrowly escaped death in a firefight when he and a band of comrades stormed a police station in Managua. After the Sandinistas seized power in 1979, Marenco held several ministerial posts under President Daniel Ortega, and then became chief of the Sandinista propaganda department.

Talks With Iran Could Benefit U.S.

Chicago Tribune · February 16, 2008 · PDF document
The United States and Iran are caught in a paradigm of hostility that has imprisoned both countries for nealy 30 years.

Posted in 2008 and Earlier, Archives, Articles