AlJazeera America: ‘Iraq crisis should bring the US and Iran together’

The resurgence of violence in Iraq has a silver lining: forcing old enemies to cooperate 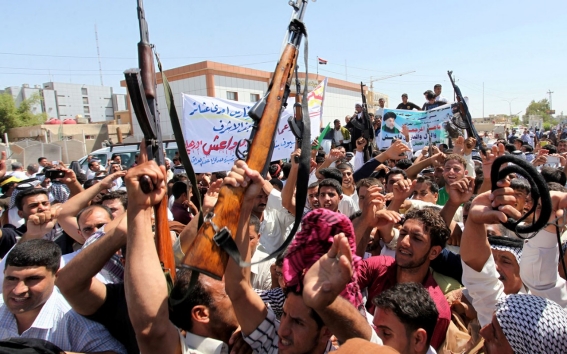 For nearly two generations, hostility between the United States and Iran has been a fact of international life. This is more than just a policy embraced in Washington and Tehran. It is the world’s most dysfunctional relationship.

The roots of this conflict go back 60 years. The United States deserves condemnation for crushing Iranian democracy in a 1953 coup organized by the Central Intelligence Agency, and for collaborating with Israel in a long and bloody covert war against Iran. For its part, Iran bears responsibility not only for the hostage crisis of 1979–80 but also for promoting terror attacks against Americans and others around the world. This is a bitter heritage, but it should not be inescapable.

What has made this lasting state of affairs so bizarre is that the two countries share strategic interests. Their mutual hostility is not the product of rational calculus. What keeps them apart is emotion — the refusal to overcome long-standing anger in order to build a future partnership. The long enmity between the U.S. and Iran is further proof, if any was needed, that emotion is always the enemy of wise statecraft.

Today, Iran and the U.S. are at long last realizing that cooperation will serve their own interests. Tragically, it has taken a major crisis in Iraq to bring them to this point. Nevertheless there are signs that they are moving toward collaboration in ways that would have been unthinkable only a few months ago.

The proximate cause for this rapprochement is a shared fear of radical Sunni movements linked to Al-Qaeda, and most immediately the actions of the militia of the Islamic State of Iraq and the Levant (ISIL). Americans see the escalation of violence in Iraq as shocking. Iranians take this threat even more seriously than the United States. It is reasonable for them to be terrified. They are geographically in the middle of the storm. Now that the United States recognizes the dimensions of this threat, which throws into stark relief the utter failure of the 2003 invasion, it is recognizing its common interest with Iran.

As President Barack Obama has said, Iranian leaders are “strategic, and they’re not impulsive. They have a worldview, and they see their interests, and they respond to costs and benefits.” Iranian strategists see two broad existential threats to their nation. Contrary to what most people think, the United States is not one of them. Nor is Israel. The twin threats are violent Sunni radicalism of the Taliban/Al-Qaeda variety, and looming environmental problems such as air pollution, shrinking water supplies and desertification. These are challenges the United States also considers urgent, and they should be the basis of new cooperation. By the nature of world politics, fighting the militant threat comes first.

It is long past time for the United States and Iran to break the shackles of history and emotion so they can promote their shared strategic goals.

In the past, cooperating with Iran might have allowed the United States to promote a settlement in Syria. Americans refused to take that path. The U.S. position, boiled down to its essence, has been that collaborating with Iran is such a hateful idea that it is preferable to allow the horrific carnage in Syria to continue. The Iraq crisis has evidently awakened Washington in ways the Syria crisis did not, largely because of the huge amount of blood and treasure the U.S. squandered there. Perhaps the experience of several months of negotiations on nuclear issues broke the ice between Washington and Tehran. Whatever the reason, a highly promising dialogue may be beginning.

Still, the shock of losing cities in Iraq for which American soldiers died just a few years ago has split the anti-Iran coalition in Washington. Sen. John McCain still believes that cooperating with Iran would be “the height of folly.” But McCain’s partner in the Laurel-and-Hardy team of Washington warmongers, Sen. Lindsey Graham, is softening his tone. He said on CNN June 15 that the United States should invite Iran to provide “some assets to make sure Baghdad doesn’t fall,” adding: “We need to coordinate with the Iranians.”

Indeed, a security partnership between Iranians and Americans could turn the tide against militants in Iraq. More tantalizing is the question of what might come next, especially if there is progress in the nuclear talks. Once the U.S. and Iran agree on the principle that radical religious militancy threatens both of them, the promoters of such militancy become enemies of both. Many of those promoters live in Gulf countries and pose as allies of the United States. The long-term strategic goals of Saudi Arabia and other Gulf states that finance terror movements conflict with those of the United States.

American strategic goals align more closely with those of Iran. If some in Washington come to realize that, an important geopolitical realignment could follow.

Despite the well-publicized political protests that took place after the 2009 elections, and a precarious economy that’s suffered repeated assaults thanks to U.S. sanctions, Iran has emerged as an island of stability in a tumultuous region. Desperate to maintain that stability, and to resist Sunni militants who want to destroy their nation, Iranian leaders are looking cautiously toward partnership with the United States. Americans, also pushed by events, seem interested. It is long past time for these two countries to break the shackles of history and emotion so they can promote their shared strategic goals.

Such a long-overdue recognition of realities on the ground in the Middle East would have implications far beyond Iraq. With a modicum of goodwill on both sides, and careful diplomatic management, a U.S.-Iran partnership could help turn back the advance of radical Islamist movements and even help stabilize the region. The two countries may never again be the intimate friends they were before 1953, or cooperate as closely as they did during the shah’s reign, but together they can do more for Middle East peace than either could hope to do alone.

Stephen Kinzer is a former New York Times foreign correspondent who has covered more than 50 countries on five continents. He is the author of Overthrow: America’s Century of Regime Change from Hawaii to Iraq and The Brothers: John Foster Dulles, Allen Dulles, and Their Secret World War. He is a visiting fellow at the Watson Institute for International Studies at Brown University, where he teaches international relations.

The views expressed in this article are the author’s own and do not necessarily reflect Al Jazeera America’s editorial policy.