Published by Stephen Kinzer on July 8, 2014 | Leave a response

IF NOT for one fateful act, history would little note Mark Sykes, a British socialite who was master of a mansion the size of Downton Abbey and loved horse breeding. It would pay even less heed to Francois Georges-Picot, an obscure French diplomat whose highest post was consul general in Beirut. Yet with a few pen strokes in 1916, these two men created borders that shape the modern Middle East.

Today those borders are collapsing in a storm of violence. Militants say they are artificial, imposed by outsiders who were not only ignorant but actively dedicated to keeping the Middle East weak and dependent. It is hard to disagree.

National borders are often considered among the few absolutes in geopolitics. Borders remain one of humanity’s central organizing principles and cannot be considered endlessly flexible. In moments of crisis there is much pious blather about their inviolability. It is right for the United States and world organizations to demand that they be respected.

It is also realistic, though, to expect that these demands will sometimes go unheeded. Borders between nations have always been fluid. They reflect the realities of power, and they shift as power ebbs and flows.

The Sykes-Picot agreement is a perfect example. With the Ottoman Empire collapsing, Britain and France decided to divide the Middle East into two “spheres of influence.” Sykes drew a diagonal line on a map from Kirkuk in the Mesopotamian desert to Haifa on the Mediterranean, and that was that. France assumed power north of the line, in what became Lebanon, Syria, and northern Iraq. Britain took what lay to the south. No one in the region participated in this bisection or even knew about it. 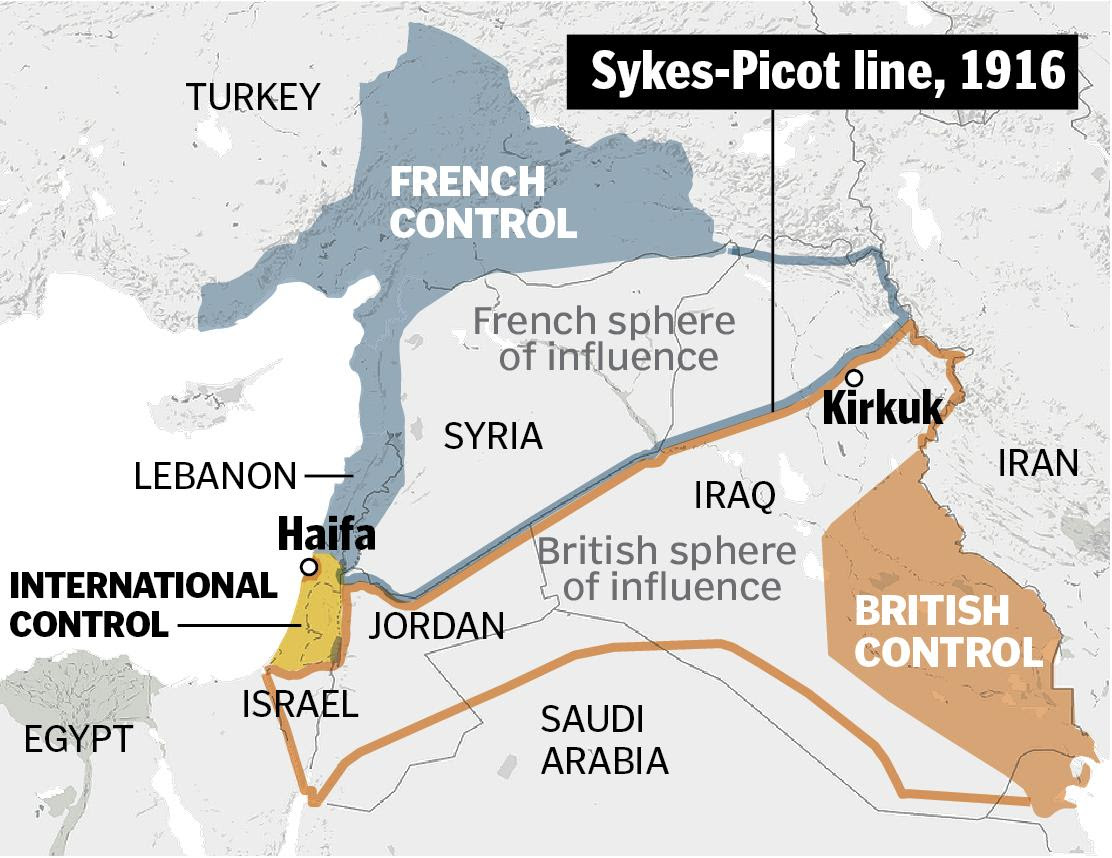 France and Britain determined a border in 1916, between Kirkuk and Haifa. France assumed power north of the line, in what became Lebanon, Syria, and part of Iraq. Britain took the area south of the line.

France and Britain determined a border in 1916, between Kirkuk and Haifa. France assumed power north of the line, in what became Lebanon, Syria, and part of Iraq. Britain took the area south of the line.

Another border, the Durand Line, has been a great destabilizing factor in Central Asia for more than a century. It was drawn by a British civil servant in 1893 to separate Afghanistan from the British Raj in India. Today it is the border between Afghanistan and Pakistan. It runs through the heart of traditional Pashtun country. Deprived of a homeland, Pashtun fighters now form the backbone of both the Afghan and Pakistani Taliban. Like militants in Iraq and Syria, they are rebelling against borders drawn by Westerners.

Early in the 20th century, as old European empires were collapsing, President Woodrow Wilson decreed that formerly subjected people deserved “political independence and territorial integrity.” Wilson’s eagerness to draw new borders was highly partial. He wanted to free Greeks and Armenians from Turkish rule because he did not think Christians should be ruled by Muslims, for example, but he opposed self-determination for Egypt, India, or Vietnam because that would have discomfited European powers. Wilson understood that borders are political instruments above all. 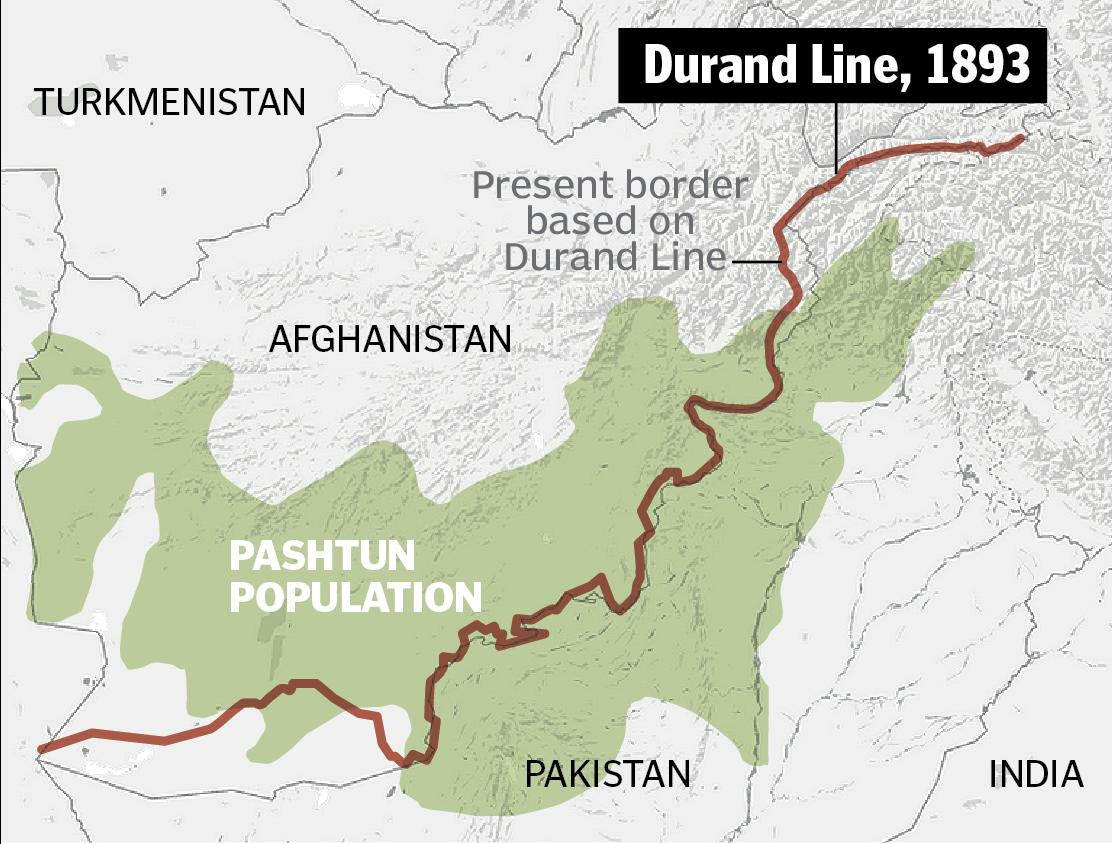 The line separated Afghanistan from the British Raj in India and is the border between Afghanistan and Pakistan today. Drawn by a British civil servant in 1893, it runs through traditional Pashtun country.

The line separated Afghanistan from the British Raj in India and is the border between Afghanistan and Pakistan today. Drawn by a British civil servant in 1893, it runs through traditional Pashtun country.

Nowhere is the welter of borders more destructive than in Africa. The overwhelming challenges of governing countries like Nigeria or the Congo are rooted in borders imposed on them by colonial powers. In 1964, recognizing that trying to redraw this map would lead to endless trouble, African countries agreed “to respect the borders existing on their achievement of national independence.” Africans have not always done so. Eritrea split from Ethiopia in 1993. South Sudan emerged in 2011. Yet even African border changes that might seem reasonable from afar — say, turning the war-torn eastern Congo into part of orderly Rwanda — are all but unthinkable because cultural, political, and economic rivalries run too deep.

Altering some of the world’s borders to give people self-rule sounds logical. But with rare exceptions, like the “velvet divorce” between Czechs and Slovaks in 1993, border changes are usually violent.

Russia’s recent takeover of Crimea was an example. Nikita Khrushchev, the Soviet leader, transferred the Russian-administered peninsula to Ukraine in 1954 for bureaucratic reasons — to streamline the administration of local water projects, according to Khrushchev’s son Sergei. After Russia and Ukraine emerged as separate countries, Russian leader Vladimir Putin decided Crimea belonged in his country, and seized it. He succeeded in part because some outsiders accepted his claim that this border was unfair.

Borders are sacrosanct in international law. In real life, they are political constructs that reflect the realities of power. Recent events in the Middle East show how quickly those realities can change. That requires outsiders to reconcile two opposing principles: Borders must be respected, yet they are by nature impermanent.

The United States and world bodies are wrestling with this contradiction today in Iraq and Syria. Later they will face it elsewhere. The balance lies in maintaining principled opposition to border changes — but also recognizing that when borders do suddenly change, it is often wiser to try to manage the new map than reject it out of hand. Accepting new borders can be less destabilizing than fighting to defend old ones.

Abandoning old maps, like the one that emerged from the Sykes-Picot agreement a century ago, is fraught with danger. Nonetheless the Middle East may soon look different. We may suddenly face a newly shrunken Iraq, an independent Kurdistan, or a rump Islamic state along the Euphrates River. This is a pattern of history. Americans should accept it.