Wilson Perfectly Embodies U.S. Hypocrisy. That’s Why We Should Remember Him.

Published by Stephen Kinzer on December 6, 2015 | Leave a response 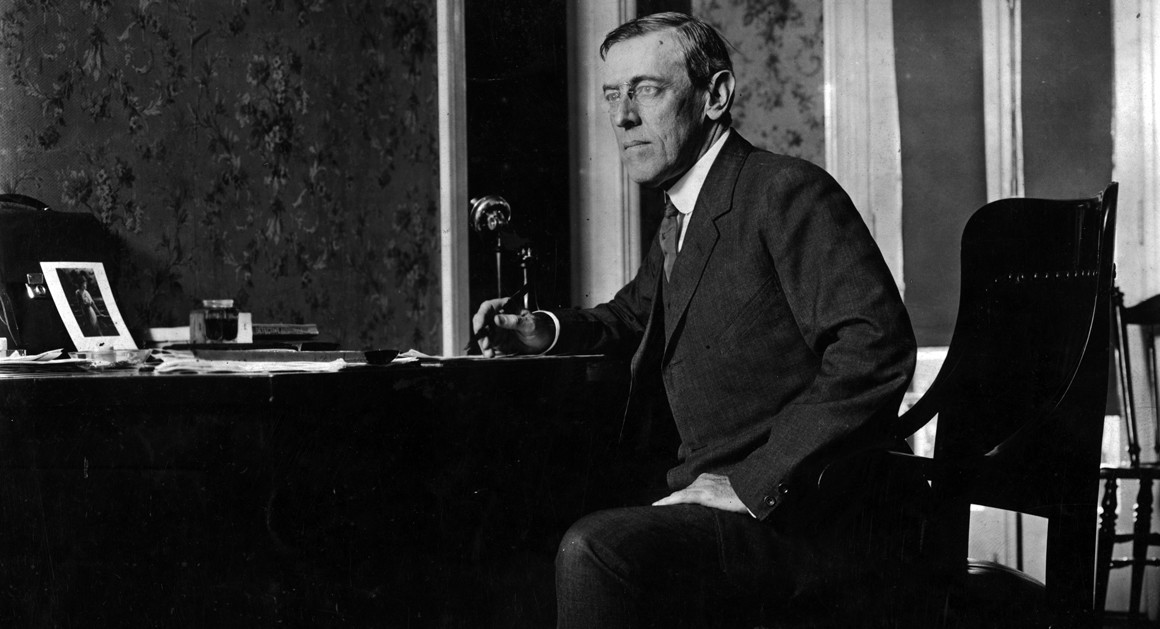 From the genteel halls of Princeton University, students are trying to pull another American hero from his pedestal. It turns out that Woodrow Wilson, who was president of Princeton before becoming president of the United States in 1913, was an outspoken racist. Therefore, the reasoning goes, Princeton should change the name of its Woodrow Wilson School for International and Public Affairs.

This would be a lamentable mistake. Wilson is the ideal person for whom to name such a school. He perfectly represents the duplicity that lies at the heart of much American foreign policy. Removing his name from the school at Princeton would be a way of hiding or downplaying his legacy. Instead, we should study and learn from it.

Like many American leaders, Wilson preached peace but crashed recklessly into countries around the world. He is the United States much of the world sees: blathering about freedom while acting to crush it. Whether this image is fair today or not, Wilson reminds us of why so many people believe it.

Changing the name of the Wilson School would be like changing the name of Dulles International Airport, which is named for the Cold War Secretary of State John Foster Dulles. Both Wilson and Dulles left terrible foreign policy legacies. By studying their errors, we may avoid repeating them, and perhaps better understand the world we live in. That is why their names should be kept before us.

Wilson preached the supreme value of self-determination, which he called the right of all people “to choose the sovereignty under which they shall live.” In office, though, he sent American troops to intervene in Cuba, Haiti, the Dominican Republic, Mexico and Russia. No other president invaded as many countries as this sworn promoter of self-determination. Like his predecessors—and successors—Wilson insisted that he was doing it for the good of the target countries. Americans would leave them alone, he promised, as soon as they learned “to elect good men.” That meant, of course, men who would place the interests of the United States above the interests of their own countries.
This was not the only way Wilson’s actions contradicted his public embrace of self-determination. While he was at the Paris peace conference following World War I, leaders of various colonized nations appealed for his support—among them Ho Chi Minh of Vietnam, then part of French Indochina. He studiously ignored them. Self-determination was a gift he believed appropriate only for Christian Europeans. That set the stage for generations of war and upheaval.

Once Wilson’s double standard became clear, nationalists in five countries exploded in protest. During the spring of 1919, Koreans rebelled against their Japanese masters, Egyptians and Sudanese rebelled against the British, Gandhi launched his epic resistance movement in India, and Sun Yat-sen led a wave of anti-imperialist protests in China. These showed the anger colonized people felt when they realized, as Sun Yat-Sen put it, “how completely they had been deceived by the Great Powers’ advocacy of self-determination.”

Patriots in some of the countries Wilson invaded were fighting for the very principles he claimed to support. So were the anti-colonial leaders whose appeals he rejected. They thrilled to his fine words, but were horrified by his actions. In foreign affairs, Wilson sets the gold standard for American hypocrisy.

Aside from acting in direct contradiction to his proclaimed principles, Wilson was capable of classically American levels of self-delusion. Even while crushing countries, he insisted he was not doing so. He embodied the American view that since the United States is uniquely virtuous, everything it does is justified. “America is the only idealistic nation in the world,” he liked to say.

In 1916 Wilson drafted a speech to Congress declaring, “It shall not lie with American people to dictate to another people what their government shall be.” He sent it to his secretary of state for review. It came back with this notation in the margin: “Haiti, S. Domingo, Nicaragua, Panama.” Confronted with this inconvenient reminder, Wilson decided not to deliver the speech.

Wilson’s racism is plainly evident to all familiar with his biography. He removed African Americans from government jobs, segregated the transit system in Washington, D. C., and had “Birth of a Nation” screened in the White House—saying afterward that its portrayal of noble Klansmen repressing ape-like black thugs was “a splendid production.” At least in this, however, Wilson was forthright in declaring his views. In his approach to the world he was the opposite. He publicly defended the right of all people to self-determination, but acted repeatedly to crush it when it did not suit his purposes.

Wilson’s capacity for mendacity, hypocrisy and self-delusion makes him the ideal person for whom to name a school dedicated to studying American foreign policy. He embodies all of its deepest contradictions. Rather than change the school’s name, Princeton should deepen its study of Wilson and what he represents. Perhaps it could even broaden its focus to study the legacy of John Foster Dulles and his brother, Director of Central Intelligence Allen Dulles, two other Princeton men. A curriculum like this would help students understand how the United States came to its current predicament in the world.

Stephen Kinzer is a senior fellow at the Watson Institute for International and Public Affairs at Brown University, and author of The Brothers: John Foster Dulles, Allen Dulles, and Their Secret World War.