The cost of short-sighted missionary zeal in Sudan 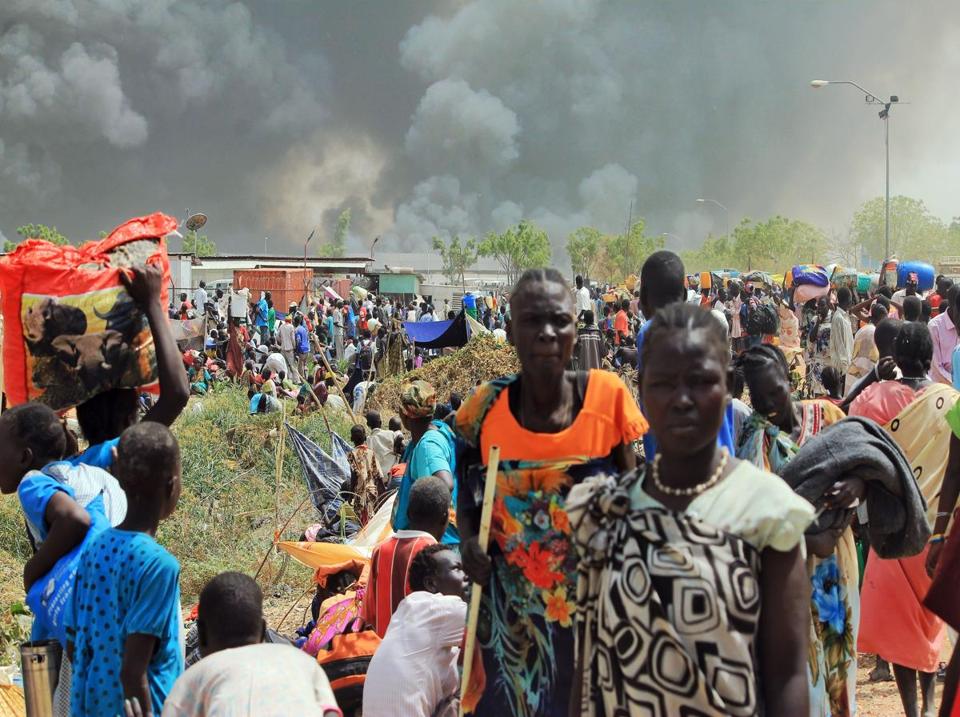 FIVE YEARS AGO, pushed by an odd coalition of movie stars and conservative Christians, the United States midwifed the birth of a new African nation, South Sudan. Senior American leaders attended the glittering independence celebration. This was supposed to be a liberation or a human rights project or a return to godliness. Only a few analysts saw the folly of such an ill-considered intervention.
“This place could go down in flames tomorrow,” General Scott Gration, the US military envoy, warned as independence approached. “The probability of failure is great.”

At the five-year point, that failure is upon us. Tens of thousands of South Sudan’s citizens have been killed in factional fighting. Hundreds of thousands have been forced to flee their homes. The economy is shattered. Inflation is the world’s worst. Soldiers loot to compensate for not being paid. At least a billion dollars has gone missing from the central bank. Abductions and rape campaigns have turned much of the country into a terror zone.

Sometimes the United States throws a country into chaos by invading or bombing. In South Sudan we did it differently. Driven by an overdose of missionary zeal, well-meaning Americans thought they were rescuing the oppressed and delivering them into freedom. Ignorance of conditions on the ground blended with cheery can-do optimism to create a humanitarian catastrophe. South Sudan’s suffering is the result of brutally harsh decisions made by local warlords, but they were abetted by meddling Americans. This misguided intervention shows how much harm we can do without even firing a shot.

Sudan has been ruled for a quarter-century by an old-style African dictator, Omar al-Bashir. Forces under his control periodically rampaged through the southern provinces. This would have attracted no more attention than other violence in Africa if it had not been for the presence of American missionaries in the south. They raised the alarm, framing the conflict as the oppression of black Christians by Muslim Arabs from the north. Led by the militantly anti-Muslim Rev. Franklin Graham, they activated networks of fundamentalist Christians in the United States and began agitating to turn the southern provinces of Sudan into a new Christian nation.

Human rights activists joined the cause. So did the Congressional Black Caucus. The key recruit, though, was the actor George Clooney. He took up the cause of secession, testified at hearings, and gave the idea decisive credibility. To add star power, Clooney recruited Ben Affleck, Angelina Jolie, and Matt Damon. It is not a lineup known for trenchant strategic thought but dazzling nonetheless.

Americans fought a civil war to prevent the secession of our South, but, in Sudan, we encouraged separatism. Years of lobbying led the Obama administration to promote a referendum in the southern provinces that produced a pro-independence vote. Under heavy pressure from Washington, President Bashir agreed to allow the division of his country. Clooney responded with a successful campaign to have the International Criminal Court indict Bashir as a war criminal. Bashir certainly qualifies but so do the terrorist warlords Clooney and his celebrity friends have empowered.

Believing that life would improve under a new regime required ignoring every key fact on the ground. The piece of Africa now called South Sudan is riven by deep tribal animosities. Its people are among the poorest on earth. Three-quarters are illiterate. There is just one paved highway in the entire country, which is the size of Texas. Western-style democracy is unknown. Yet a determined group of Americans imagined that it could transform this into a flourishing republic by bringing the leaders of two major ethnic groups together. Both are well known as violent and corrupt. Not surprisingly, they have ignored pleas from faraway Washington. Thanks for giving us a country, they tell us, but now we’ll get on with our war.

Foreign policy is supposed to be shaped by clear-eyed recognition of national security interests. Yet dividing Sudan served no US interest. The interventionists were driven by something else: a misguided sense of moral idealism. They were right to be outraged by Bashir’s excesses but wrong to believe they could bring peace and freedom to a land so geographically, politically, and culturally distant from the United States.

The impulse to set forth into the world and save the suffering is deeply woven into our national psyche. Our ignorance of other countries is overwhelmed by our boundless self-confidence. Many of the Americans who promoted the secession of South Sudan truly believed they would be making part of Africa a better place. Now violence and terror have reached levels far beyond what repelled them in the first place. By crashing into a country about which they knew painfully little, the interventionists ended up intensifying human suffering rather than alleviating it.

In Sudan, a bad leader was doing bad things. That was enough to send Americans into action, just as it was in Iraq and Libya. In each case, the result has been the same. We discover to our shock that we cannot reshape nations and regions far from our shores. The lesson of South Sudan is that crashing into other countries often leads to tragedy — even if we do it with policy instead of guns.