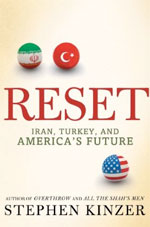 The bestselling author of “Overthrow” offers a new and surprising vision for rebuilding America’s strategic partnerships in the Middle East.

What can the United States do to help realize its dream of a peaceful, democratic Middle East? Stephen Kinzer offers a surprising answer in this paradigm-shifting book. Two countries in the region, he argues, are America’s logical partners in the twenty-first century: Turkey and Iran.

Besides proposing this new “power triangle,” Kinzer also recommends that the United States reshape relations with its two traditional Middle East allies, Israel and Saudi Arabia. This book provides a penetrating, timely critique of America’s approach to the world’s most volatile region, and offers a startling alternative.

Kinzer is a master storyteller with an eye for grand characters and illuminating historical detail. In this book he introduces us to larger-than-life figures, like a Nebraska schoolteacher who became a martyr to democracy in Iran, a Turkish radical who transformed his country and Islam forever, and a colorful parade of princes, politicians, women of the world, spies, oppressors, liberators, and dreamers.

Kinzer’s provocative new view of the Middle East is the rare book that will richly entertain while moving a vital policy debate beyond the stale alternatives of the last fifty years.

An original, unsettling critique of America’s many blunders in the Middle East.
In Iran, a statue honors Howard Baskerville, and streets and schools bear his name. A young American teacher, he died in 1909 leading volunteers in defense of this nation’s fledgling democracy. After delivering this surprising bit of history, journalist Kinzer (International Relations/Boston Univ.; A Thousand Hills: Rwanda’s Rebirth and the Man Who Dreamed It, 2008, etc.) states bluntly that Iran, along with Turkey, the only Islamic nations in the area with vibrant democratic traditions, should be America’s closest allies, replacing Israel and Saudi Arabia. The author makes his case by recounting their recent history. Most readers recognize the name Kemal Ataturk, the charismatic leader who single-handedly revolutionized Turkey after World War I by introducing European institutions. Turkey is prospering and gets along with all Middle Eastern nations including Israel. When Iran threatened to nationalize British oil concession, a CIA-financed coup destroyed its democracy and established Mohammed Reza as absolute ruler. Kinzer reminds readers that after a broad-based—and not solely Islamic—1979 uprising overthrew the Shah, Iran opposed Saddam Hussein, al-Qaeda and the Taliban. After 9/11 it cooperated with the United States in Afghanistan until, in early 2002, President Bush branded it a member of the “axis of evil” along with North Korea and Iraq. Cultivating Turkey and Iran instead of the reactionary Saudi monarchy and pugnacious Israel makes sense, but Kinzer admits a major barrier: America is also a democracy. Smarting over the humiliation of the 1979 hostage crisis—but ignoring Iran’s humiliation in 1953—most American voters loathe Iran and support Israel uncritically. An imaginative solution to the Middle-East stalemate, though perhaps too imaginative for most American readers.
-KIRKUS 4-1-10

Kinzer (Overthrow), columnist at the Guardian, takes an iconoclastic approach in this smart policy prescriptive that calls for elemental changes in America’s relationships with Israel and Saudi Arabia, and even more remarkably, for the U.S. to find more sensible and natural allies in Turkey and Iran, “the only Muslim countries in the Middle East where democracy is deeply rooted.” This “radical break from diplomatic convention” has its roots deep in the cold war history that Kinzer spends most of the book attentively mining. When he’s corralling Middle Eastern history, Kinzer does an excellent job at stitching essential facts into a coherent and telling whole, demonstrating why, for instance, Turkey’s recent return to greater religiosity is a victory against “Islamist policies” and how Israel’s willingness to do America’s dirty work (e.g., selling arms to Guatemala’s military regime) tied the U.S. to Israel and Saudi Arabia so powerfully in the past. He’s less successful in analysis, though, and is prone to repetition; this astute book builds toward convincing new ideas, but doesn’t provide the necessary scaffolding to hold them up.
– Publisher’s Weekly, April 19, 2010

“A vivid account underscoring the persistent folly of Western, and especially U.S. policy in the Middle East. This is history with bite and immediacy. Yet Stephen Kinzer sees cause for hope: The possibility of change exists if we but seize it.”
– Andrew J. Bacevich, author of The Limits of Power: The End of American Exceptionalism

I read and relished Stephen Kinzer’s Reset – kudos to him for approaching the enduring problem of the Middle East in a fresh way. Even old hands may learn something new in these fluent, timely, and provocative pages.
–Karl E. Meyer, coauthor of Tournament of Shadows and Kingmakers: The Invention of the Modern Middle East

Does the United States have nothing but bad choices in the Middle East? Stephen Kinzer says we have attractive choices if our leaders will just abandon the premises of the Cold War and look instead at opportunities in front of their eyes. Kinzer elaborates grand ideas in the conversational voice of a story-teller and challenges conventional wisdom in the most reasonable tones. But let the reader beware: He will make you think, and you may never see the region in quite the same way again.
–Gary Sick, senior research scholar, Columbia University, and author of All Fall Down: America’s Tragic Encounter with Iran

Stephen Kinzer’s Reset argues that contradictory U.S. policies in the Middle East are producing serial disasters. He recounts with verve the dramatic historical events and the vivid personalities that brought us to these straits, and argues for a new realism about the rapid rise of Iran and Turkey as regional superpowers challenging the old, dysfunctional bargains struck in the twentieth century. This book is a must-read for anyone concerned with the future of the United States in the Middle East.
–Juan Cole, professor of history, University of Michigan, and author of Napoleon’s Egypt andEngaging the Muslim World

Stephen Kinzer’s deep knowledge of the Middle East is complemented by his lucid style and new ideas. He sees Turkey as a key state for the region and the world, suggests new and innovative ways to deal with Saudi Arabia and Iran, and calls for the United States to play a much more robust and determined role in the Arab-Israeli peace process. His historical perspective and trenchant analysis make Reset an informative read for experts and newcomers alike.
–Thomas R. Pickering, former U.S. ambassador to the United Nations and under secretary of state for political affairs

Kinzer re-imagines the world and America’s role in it.
–Robert Lacey, author of Inside the Kingdom: Kings, Clerics, Modernists, Terrorists, and the Struggle for Saudi Arabia