How Boston fought the empire

Published by Stephen Kinzer on January 23, 2017 | Leave a response 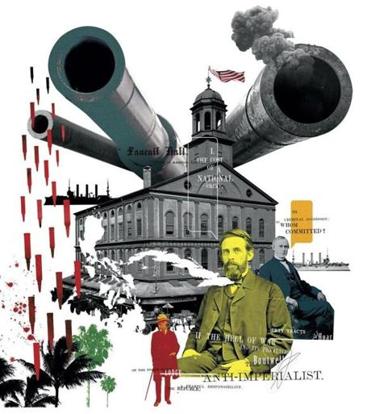 WHERE BETTER to launch a patriotic uprising than Faneuil Hall in Boston? It is a lodestone of American liberty, a cathedral for freedom fighters. That is why a handful of eminent Bostonians chose it as the place to begin a new rebellion on the sunny afternoon of June 15, 1898.

Like all Americans, they had been dizzied by the astonishing events of recent weeks. Their country had suddenly burst beyond its natural borders. American troops had landed in Cuba. American warships had bombarded Puerto Rico. An American expeditionary force was steaming toward the distant Philippine Islands. Hawaii seemed about to fall to American power. President William mckinley had called for 200,000 volunteers to fight in foreign wars. Fervor for the new idea of overseas expansion gripped the United States.

This prospect thrilled some Americans. It horrified others. Their debate gripped the nation. The country’s best-known political and intellectual leaders took sides. In the history of US foreign policy, this is truly the mother of all debates.

When we argue over whether we should depose a government in Iraq or Syria or Libya, whether we should wage war in Afghanistan, whether we should encourage the bombing of Yemen, or whether we should seek to bend Russia to our will, we are arguing the same question that was at the center of this original debate. Every argument about foreign intervention that we make today — on both sides — was first made in the period around 1898. Today’s debates are amazingly precise repetitions of that first one. The central question is the same: Should the United States project power into faraway lands? Yes, to guarantee our prosperity, save innocent lives, liberate the oppressed, and confront danger before it reaches our shores! No, intervention brings suffering and creates enemies!

Boston was the epicenter of that original debate. Bostonians played such a large role in the national debate that one California newspaper called anti-imperialists “the kicking Bostonese.” Several hundred of them turned out for the Faneuil Hall meeting. One speaker, the Rev. Charles Ames, a theologian and Unitarian pastor, warned that the moment the United States seized a foreign land, it would “sacrifice the principles on which the Republic was founded.”

The policy of imperialism threatens to change the temper of our people, and to put us into a permanent attitude of arrogance, testiness, and defiance towards other nations. . . . Once we enter the field of international conflict as a great military and naval power, we shall be one more bully among bullies. We shall only add one more to the list of oppressors of mankind.

At the end of that afternoon, one of the meeting’s organizers came to the podium and read a resolution. “Resolved, that the mission of the United States is to help the world by an example of successful self-government, and that to abandon the principles and the policy under which we have prospered, and embrace the doctrine and practices now called imperial, is to enter the path which, with other great republics, has ended in the downfall of free institutions,” it declared. “Resolved, that our first duty is to cure the evils in our own country.” The resolution was adopted by acclamation.

AT THE very moment these words were shaking Faneuil Hall, debate on the same question — overseas expansion — was reaching a climax in Congress. It is a marvelous coincidence: The first anti-imperialist rally in American history was held on the same day that Congress voted, also for the first time, on whether the United States should take an overseas colony. The colony in question was Hawaii, but all understood that the real question was immensely greater. It was nothing less than the future of the Republic: whether or not the United States should become a global military power and seek to shape the fate of faraway lands.

On that day, as expected, the House of Representatives voted to annex Hawaii. Yet the great debate had only begun. Working from offices in Boston, anti-imperialists spent the summer and fall of 1898 writing letters to potential sympathizers across the country.

Their work came to fruition on Nov. 18, when an eager crowd packed a law office on Milk Street to witness the founding of the Anti-Imperialist League. George Boutwell, who had been a passionate abolitionist as well as a congressman, US senator, and governor of Massachusetts, was chosen by acclimation as the league’s first president. In his mind, every abolitionist was a natural anti-imperialist, since anyone who opposed keeping human beings as slaves must also oppose ruling other peoples against their will.

At the end of 1898, American negotiators forced the defeated Spanish to sign the Treaty of Paris, in which they surrendered Cuba, Puerto Rico, Guam, and the Philippines. On Jan. 4, 1899, President mckinley submitted the treaty for Senate ratification. That set off a monthlong debate over what one senator called “the greatest question that has ever been presented to the American people.” The dominant figure on each side was a brilliantly articulate Republican senator from Massachusetts.

George Frisbie Hoar of Worcester led the anti-imperialist charge. The United States, he insisted, must not “rush madly upon this new career,” lest it become “a cheap-jack country raking after the cart for the leavings of European tyranny.” He ended his speech in a crescendo: “The poor Malay, the poor African, the downtrodden workman of Europe will exclaim, as he reads this new doctrine: ‘Good God! Is there not one place left on earth where, in right of my manhood, I can stand up and be a man?’ ”

Hoar’s sharpest opponent was Henry Cabot Lodge of Beacon Hill and Nahant. Lodge told the Senate that since many foreign peoples were unequipped to govern themselves wisely, they should submit to American guidance and trust “the American people, who have never failed in any great duty or feared to face any responsibility, to deal with them in that spirit of justice, humanity, and liberty which has made us all that we are today or can ever hope to be.”

From their bustling office on Kilby Street, leaders of the Anti-Imperialist League fed information to friendly senators and heavily lobbied the handful who remained undecided. The league also published a stream of pamphlets, called Liberty Tracts, aimed at bringing its arguments to a larger audience. Often their titles were questions. “Which shall it be, nation or empire?” Asked one. Another: “Is it right for this country to kill the natives of a foreign land because they wish to govern themselves?”

ON FEB. 6, 1899, despite these intense efforts, senators ratified the Treaty of Paris — by just one vote more than the required two-thirds majority. Armed rebellion broke out immediately in the Philippines. Tens of thousands of American troops were sent to suppress it. President mckinley faced a difficult task: explain to a divided nation why taking foreign lands was no betrayal of the American idea. He decided to deliver a speech in Boston, home of the Anti-Imperialist League and thus the heart of enemy territory. To assure himself a friendly audience, however, he chose as his platform the Home Market Club, one of the country’s most potent agglomerations of corporate power.

A crowd led by Mayor Josiah Quincy cheered as mckinley emerged from South Station around midday on Feb. 15, 1899. The next night, nearly two thousand guests packed Mechanics Hall for the largest banquet ever staged in the United States. In his speech, mckinley asserted that the essential goodness of the American people is the supreme and sole necessary justification of whatever the United States chooses to do in the world. This goodness, he acknowledged, might not be clear to the “misguided Filipino,” but soon the islands would prosper under the rule “not of their American masters, but of their American emancipators.”

“Did we need their consent to perform a great act for humanity?” He asked. “We had it in every aspiration of their minds, in every hope of their hearts.”

These words disgusted the philosopher William James. In an anguished letter to Boston newspapers, he called mckinley’s speech a “shamefully evasive” attempt to obscure the central truth of the age: “We are cold-bloodedly, wantonly, and abominably destroying the soul of a people who never did us an atom of harm in their lives. It is bald, brutal piracy.”

Alarmed by the spread of anti-imperialist ideas, Lodge invited his closest friend, Governor Theodore Roosevelt of New York, to join him in Boston to launch a counterattack. On Oct. 31, 1899, both spoke to the Republican Club of Massachusetts at the cavernous Music Hall on Winter Street. “We have got to put down the insurrection!” Roosevelt cried. “If we are men, we can’t do otherwise!” Lodge portrayed anti-imperialists as not only defeatist, but complicit in the killing of American soldiers.

“I vote with the army that wears the uniform and carries the flag of my country,” he said. “When the enemy has yielded and the war is over, we can discuss other matters!”

Tides ran in favor of the expansionist idea. Prominent anti-imperialists lost elections. War in the Philippines slowly reached its bloody end. Americans began focusing on other problems. The United States had leaped from continental empire to overseas empire.

“Well, we are defeated for the time,” admitted the Cambridge anti-imperialist Charles Eliot Norton. “But the war is not ended, and we are enlisted for the war.”

That war — which is actually a war against war — has never ended. The debate over American intervention abroad, which began at Faneuil Hall in 1898, is still raging. It will shape the new administration in Washington and, through it, the world.

Stephen Kinzer is a senior fellow at the Watson Institute for International and Public Affairs at Brown University, and author of the forthcoming book “The True Flag: Theodore Roosevelt, Mark Twain, and the Birth of American Empire.” Follow him on Twitter @stephenkinzer.